The Stabilization of Oil

Oil Production Stability and the Road Ahead

The recent production freeze between export leaders Russia, Qatar, Venezuela, and Saudi Arabia was a critical juncture for oil prices, and may have been underappreciated by U.S. investors. While it won’t satisfy U.S. producers and send oil prices back above $70/barrel, it will likely satisfy markets and stop further price declines. Even more, it sets forth some very plausible forward looking assumptions for 2016.

The Significance for Investors

The development of such a scenario means the worst effects of the oil price collapse are now behind us, and thus, an improving picture lies ahead. Figure 1 illustrates the trajectory if WTI crude price were to improve at a modest pace of $1/barrel per month through 2017. 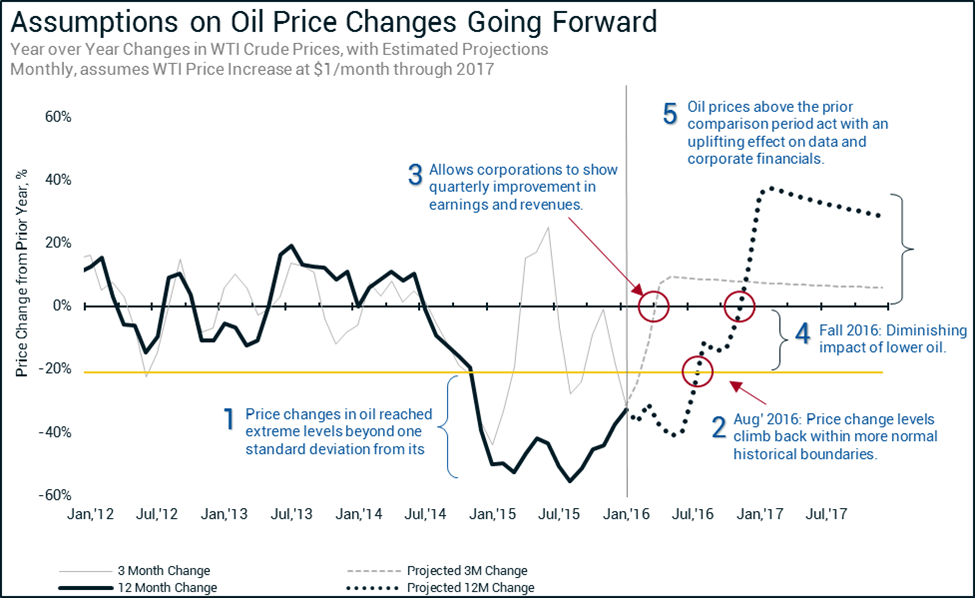 Even though prices will continue to be relatively low when compared to the 2011-2014 era, on a direct quarterly or annual change basis, oil will start recording higher levels. The improving direction of oil prices will manifest in various forms, but the following three are the most important.

#1. The Energy Sector. The energy sector has been bleeding severely with earnings and revenue declines. But remember, this is always in comparison to some prior number – usually on a quarterly or annual change basis. Climbing prices allow big, stable energy companies to begin reporting positive and growing metrics to Wall Street again.

#2. The S&P Composite Index. Since mid-2015, the S&P 500 has produced consecutive quarters of negative earnings and revenue declines. A deeper analysis has consistently showed the problem isn’t broad throughout all sectors, but has been primarily caused by the disproportionately large negative impact coming from the energy sector. In every quarter, the S&P revenues and earnings would have delivered positive outcomes when excluding the energy sector. As oil prices retrace their 2015 path, energy’s drag will convert to an energy lift. Already, Factset is showing expectations for declines persisting through the 2nd quarter of 2016 and then moving to a positive path at the back half of the year.

#3. The Manufacturing Outlook. One big lesson over the last year has been the significance of petroleum production as a sub-component to manufacturing data. As prices ticked down, the petroleum industry tugged the overall data down with it. There are estimates that oil factors in for about 20% of the amount of U.S. manufacturing.

As oil prices climb back to higher levels, it will result in a higher level of petroleum production (as measured in dollars) and rising manufacturing numbers. Furthermore, there is historical precedence for such a claim. Since 1986, there have been seven episodes where the ISM PMI score has climbed to a level of 57 or higher. Five of those episodes coincided with oil price increases of 35% or more from the prior year.

The oil price collapse of 2015 took many casualties but the U.S. economy wasn’t one of them. In the wake of a growing economy and improvement in oil prices, manufacturing data, and corporate earnings, prudent investors should not underestimate the positive effects as oil prices climb.

Obviously, should the oil production/consumption dynamics change it could re-route the path laid out here. However, markets have historically delivered robust returns in the 12 months following a correction. The stabilization of oil prices lays out an important narrative for why this one may well be on that same path.