Closing out the Death Cross

It was late August when headlines went crazy, the “Death Cross” had arrived. Announcements were everywhere: 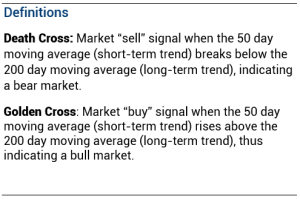 CNBC, Bloomberg, Marketwatch, Business Insider, etc. In the wake of the correction, the short-term trend line of the S&P 500 had crossed below the 200 day moving average. Media-types were shouting from the hilltops, “Beware, run for your lives! The Death Cross is here.”

The latest version of the Death Cross now appears to have been a false alarm. Following the rules (from the “sell” signal of late-August to the “buy” signal yesterday) proved to be detractive for investors, meaning it hurt returns by selling low and buying back at a higher price.

All in all, following the Death Cross signal neither protected investors from volatility (by selling after the initial market slide) nor from further declines (triggering four days after the market trough). Additionally, when all was said and done, investors incurred a penalty of -2.6% by buying in higher than their exit price.

The Record on the Death Cross

By the name alone, the death cross must mean something imminently bad is about to happen, right? While the warnings were prolific, the evidence that fear or doom was warranted was scant. So, in response, we examined the death cross “sell’ signal with a more comprehensive perspective in mind.

When reviewing the record of the Death Cross, one discovers this recent roundabout has been rather typical. Following the Death Cross hardly ever helps, and in fact, most of the time it penalizes investors with lower returns.

In summary, investing with the Death Cross will likely lead to getting out after market volatility has arrived, mostly after the worst has hit, and eventually buying back in at higher prices. In the only instances where it has worked, the economy was deteriorating into a steep recession. Of course, though, if heading for a steep recession, any “sell” signal will help investors and this one is no more valid than any other.

At most, the only reliable help the Death Cross offers is for market pundits, who can depend upon the eyes and ears of viewers unable to avert their eyes from the rhetorically sensationalized name.

Read on to evaluate for yourself.